Kelly David experienced heart palpitations — skipped beats, a fluttering feeling, rapid heartbeats — her entire life. She was so used to them, she hardly paid any attention. But about eight years ago, when she was pregnant with her third child, she started having what she calls brownouts.

I wouldn’t fully blackout, but I would be sitting there and feel like I was going to pass out. I’d say that something was going on and would be told, oh, you’re pregnant. Everybody thinks pregnant women just pass out, they don’t feel well, but I’d been pregnant two other times and this was not good. This felt different. My favorite response was you’re older than you were with your other kids. I was only 30.

One day Kelly did pass out. She went to the ER but they didn’t find anything wrong. She was referred to a cardiologist, who put her on a 30-day heart monitor. When she went back for the results, she expected to hear once again that nothing was found. It probably had to do with being pregnant.

I thought it would be this two-minute visit and he’d say you’re fine, go home. Only he asked if anyone in my family ever dropped dead suddenly? I said I didn’t think so. He told me something was definitely going on. There are all kinds of things that can cause tachycardia (abnormally rapid heartbeat), he said, but my heart wasn’t responding well when it happened. It stopped and it stopped for too long, which caused me to pass out.

Kelly had a procedure called an Electrophysiology Study and Ablation. Using x-rays for guidance, the cardiologist threaded tiny catheters through blood vessels in her upper thighs and up into specific locations in her heart. First, he figured out which areas were responsible for her abnormal rhythm and then he cauterized (burned) them with radiofrequency energy. It was a six-hour procedure.

I was pretty good for a long time. I would still have some palpitations, though, and developed anxiety about them. I also never got my pre-procedure health and wellness back. I tired more easily and didn’t have a lot of energy. I would blame it on having three kids, a fulltime job and getting older, although I was only in my 30s.

Five years passed. One day she was driving on the highway when she felt her heart go out of rhythm. She doesn’t remember pulling over, but she did and passed out. When she came to, she had chest pain but was well enough to get off the highway and call her husband.

Three months later, she had a second ablation and another procedure — a transesophageal echocardiogram (TEE). The TEE showed that Kelly also had a patent foram ovale. The foramen ovale is a hole in the heart that we’re all born with but usually closes shortly after birth. Only it doesn’t in about 25% of the population.

Most people with it have no idea and never have any symptoms. But, according to the Mayo Clinic, “some studies have found the disorder is more common in people with certain conditions, such as unexplained strokes and migraines with aura.” Research is ongoing.

The news was a lot for Kelly to take in — she not only had a faulty electrical system she also had a hole in her heart. Both stroke risks. On top of that, she developed some other issues.

The heart problems made me very tired, the kind of tired you can’t articulate. It’s as if someone took away every ounce of energy you have. It’s an effort to just lift your arm. I gained weight. I became depressed. I was scared. It stayed with me even longer than I realized.

I finally went to my primary care doctor and said I’m afraid to go to the gym. I’m afraid to go for a walk. I’m afraid I’ll pass out on the road and I’ll be by myself and nobody will find me. I’m not having fun. I have these three kids who are so awesome and I’m robbing them. I’m not doing fun stuff with them and I want to.

It was her primary care doctor who took her initial symptoms seriously and referred her to a cardiologist when others blamed it being pregnant. She took Kelly’s fears seriously, too.

She said they could keep me as healthy as possible and keep monitoring me, but that at some point you have to decide. You can either be on the couch waiting for something to happen or you can run and be active.

Kelly decided to be active. Her work (she’s the marketing and public relations director for a large health care organization) had just started a new wellness program for employees with certain risk factors. She qualified.

Part of it was you got a fitness tracker and you would check in with a health coach and you had to get 150 activity minutes a week. It didn’t have to be workout minutes. it could be any kind of movement. I started with that and they got me a plan.

But what really got Kelly going is when she decided to do the Tri for a Cure, an annual all-women triathlon sponsored by the Maine Cancer Foundation.

I knew I could swim and I figured I won’t run. I’ll just walk it. I didn’t have a bike and was petrified of cycling. I bought one and cycled for the first time since high school. I said I’m going to do it this one time. I’m just going to sign up.

Kelly did the Tri and she finished. The proof is in the picture. She says there was a time when she never would have shared a picture of herself dragging over the finish line. But now, she sees it as a cause for celebration.

It’s the best picture I’ve ever taken. It doesn’t matter what I look like or that I was just in two hours of monsoon rain. That picture is my favorite ever. My daughter is so excited for me. She had watched me train and for me to have shown her that if you work hard you can accomplish what you want to accomplish. That’s wonderful.

So wonderful, she’s already training for this year’s Tri, which is in July. That’s not all she’s doing. 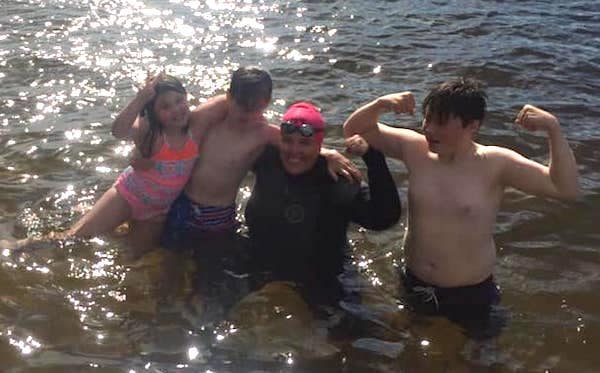 I’ve always had this great relationship with my kids, but my relationship with them now is so much richer. My youngest and oldest kids did a duathlon together. I was never exposed to that growing up, so to be able to expose them to a sport that could be lifelong, to see them proud of themselves is so great.

We run together, we bike together, we walk together. My son, who’s 13 and taller than me, has started running with me. He didn’t love it at first, so it was kind of funny. He came to be nice and then, over time, he got faster and the second time he was “well, that’s cool.”

Deciding to set aside her fears and start moving didn’t happen overnight.

It took me a lot of different moments that got me to that point of I’m done, I cannot live like this anymore. It was a long time of thinking and feeling bad. When I decided, I was so ready.

And there were plenty of times when she felt discouraged. Like when she and her friend Amy joined sheJAMS, which offers triathlon training for women. She came in last on the bike. Others took an hour, she took almost two. Andrea Gleason, who co-founded sheJAMs, gave her a piece of advice that stuck with her.

She said you can only do your best with today’s body. So next week if you have a crappy week and you haven’t slept and you go to the Tri, all you can do is the best you can with that body that day.

So what Kelly tries to do is make her body, mentally and physically, the best it can be in the moment.

It’s work. You have to put the work in. And it’s so much more about wellness than it is about the actual diet or workout choices you make because everybody is going to be different. You have to be okay with not being perfect. Striving for perfection can be exciting, but if it’s the only thing driving you, you’ll end up quitting or failing because it’s not enough.

And as for my heart, in the long run, this will be better for it.

Kelly works for Spectrum Health Care Partners, which is a major sponsor of the Catching Health blog. In no way is this a sponsored post. A mutual friend told me about her experience and I asked Kelly if I could share her story for two reasons: I thought it would help raise awareness about her heart conditions and I thought that the ways she is trying to improve and simply live her life would be inspirational.